I tried to make a life-size copy of ‘Nachlass,’ in charcoal. It nearly worked but due to the way reproductions of Klimt’s drawings have been cropped some gestural detail was lacking. I authenticated the study and eventually created an image good enough to work with.

On a circular stretcher, I transferred my drawing to canvas. After carefully reinforcing lines with Burnt Sienna, I decided the model was a redhead then painted her form pale white. Klimt’s original showed his subject reclining on a piece of drapery which I deemed to be gold. I made the model’s lips cerise. At this stage the colour combination in Rude & Nude: ‘Nachlass’ (including raw canvas) was harmonious.

To control where subsequent layers of paint might settle  I applied a crude isolating varnish of petroleum jelly. Next, the artwork was attached to my spin-painting contraption. 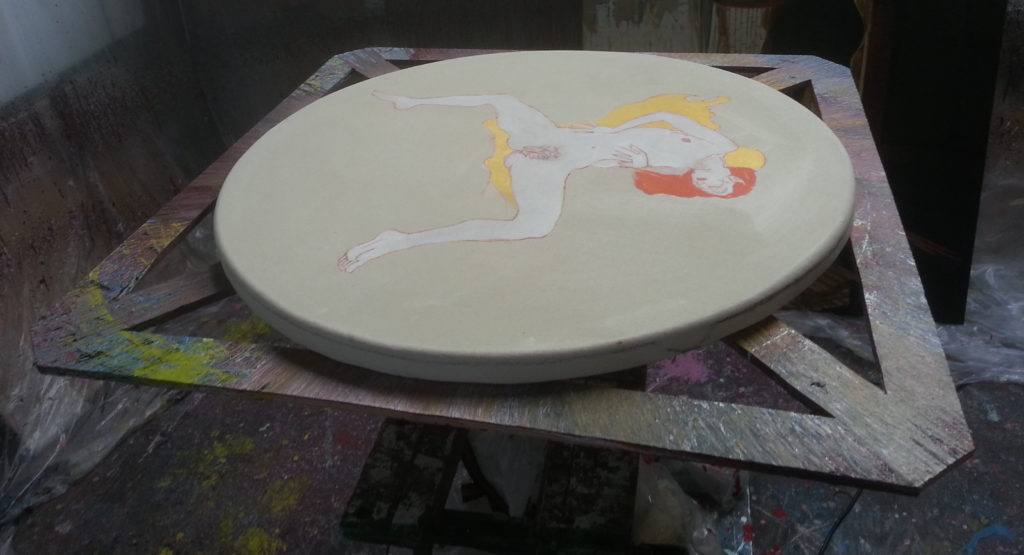 Watching the figure start to gyrate was absurd and mesmerising. I tipped various concoctions of thin acrylic emulsion over the canvas, Rude & Nude: ‘Nachlass’ was in the process of being made. 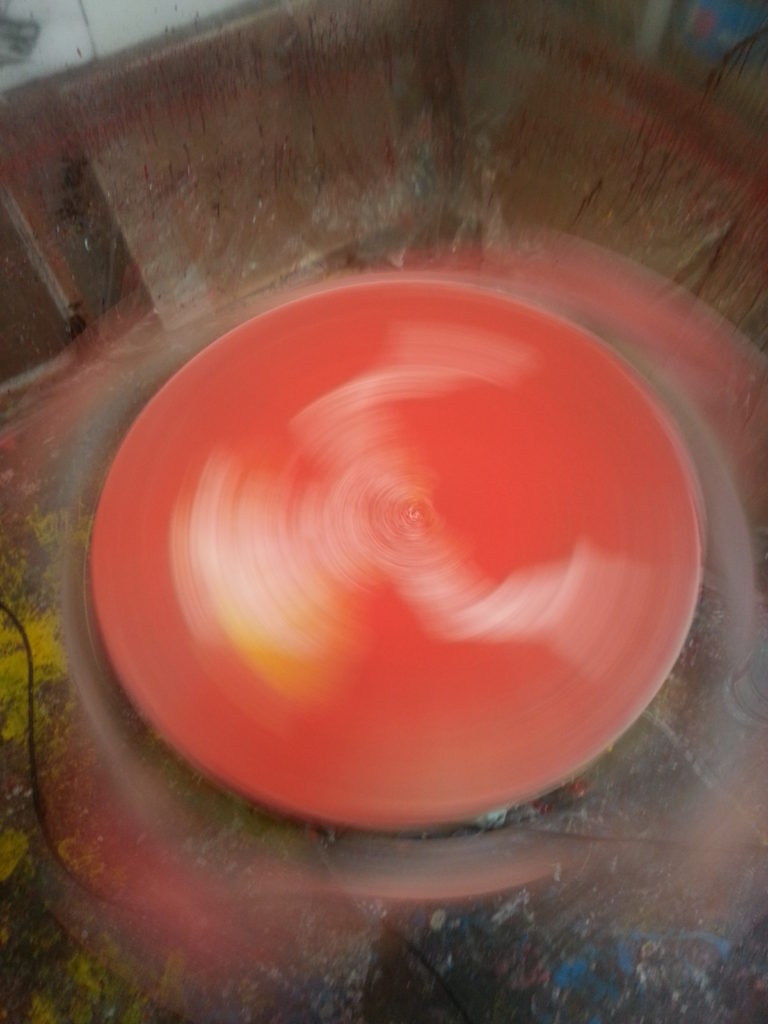 I wanted a fast result with wet into wet paint effects. I used blood red, fiery orange and purple/black. After a first spin, I left the painting to dry.
I didn’t care for the surface I’d created, so sanded it down generating a soft, smoky feel. 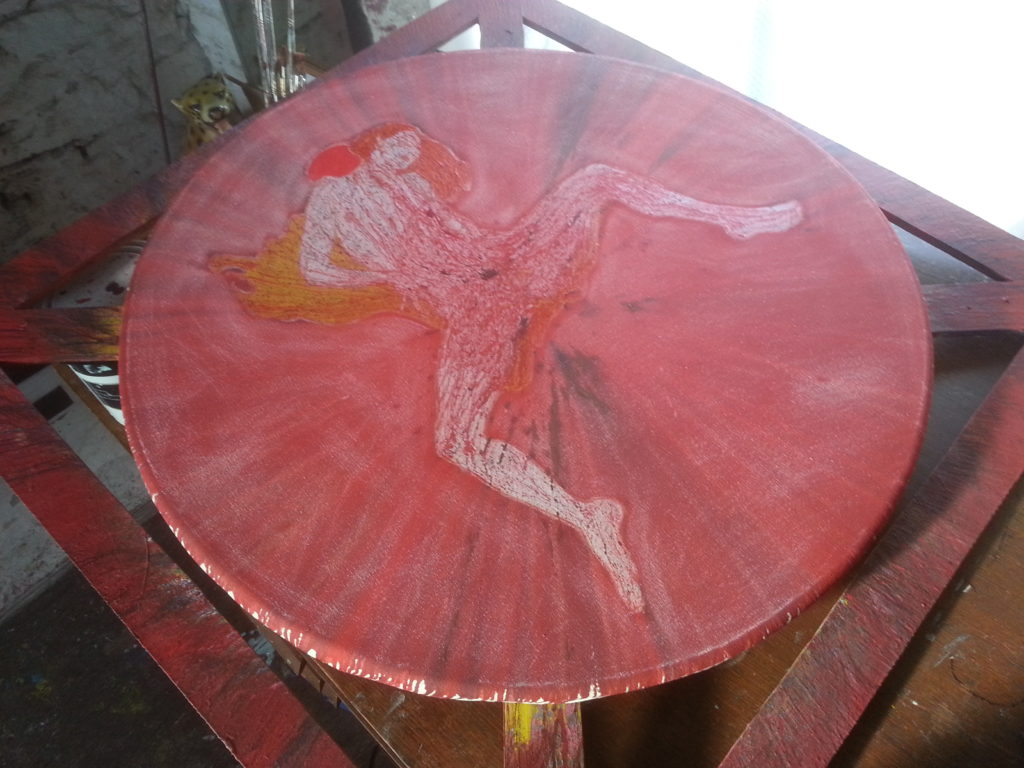 I created another layer, allowed it to dry – then scraped away the ‘isolating varnish’. The figure looked as if she’d been exhumed from a shallow grave. Lines of paint resulting from centrifugal force radiated behind her – like chromatography. 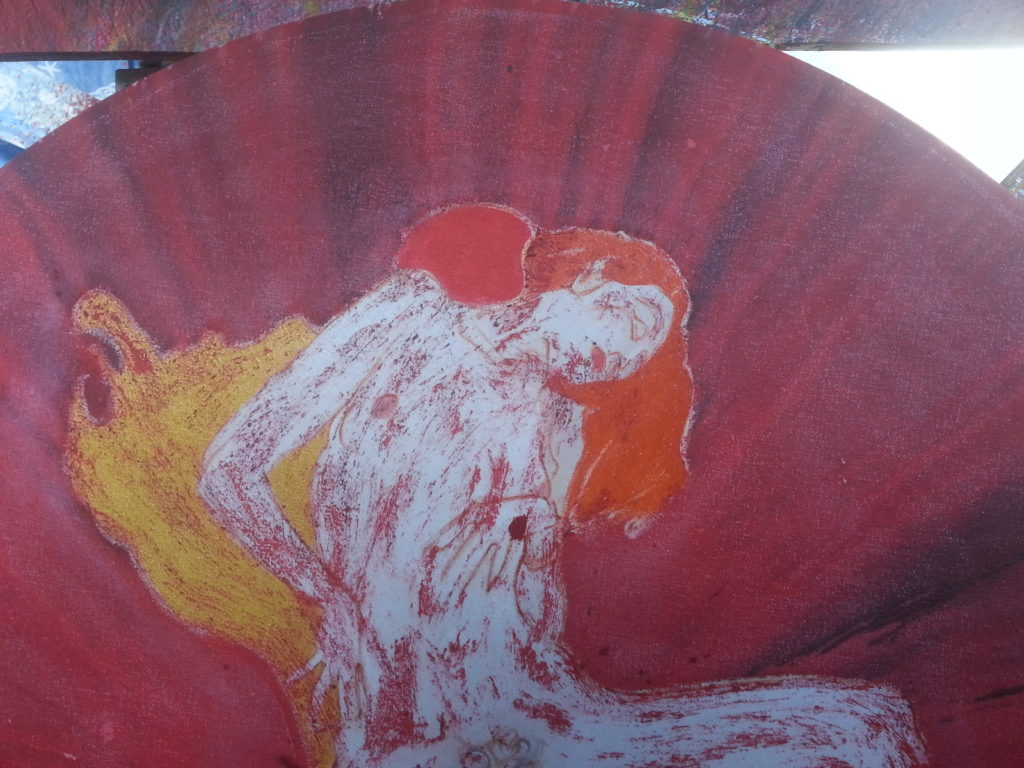 I tidied the image and repainted it with oils, then put it on my studio wall. After some time I noticed a fault with the drawing, analysed the reproduction and adjusted Rude & Nude:’Nachlass’. I’d got the model’s head too far over. By projecting a vertical upwards across the figure I was able to rectify the issue.

Apparently Klimt would sometimes make drawings from cadavers in a mortuary. Having done the same myself – I couldn’t help but notice how Klimt’s ‘model’ seemed in a greater state of narcosis than her post-coital demeanour might suggest. Instinctively I chose to paint her a pale colour in Rude & Nude: ‘Nachlass’. It was unlikely for one of Klimt’s partners or prostitute models to have held such a pose for any length of time. He did however, imbue her face with a wry smile of pleasure and contentment.

‘Klimt’s female figures are symbols of a time of transition rather than actual women. They personify the new appreciation of the power of eroticism as opposed to the crippling morality of a society which clings to that morality for its survival and yet is doomed to extinction because it is unable to accept new norms.’ So wrote the German author Hans H. Hofstätter in an essay titled ‘Klimt: drawing against morality‘ in 1979.

Hofstätter was writing decades ago. Klimt’s audacious, risqué attitude was a case apart in Viennese society; how would it be accepted now? The painting I’ve created using a gimmick popularised by someone whose real art form is commerce – and one of Klimt’s most prurient studies, is a forceful challenge to the ‘new status quo’ (if it can be called that) or is it just more of the same? The same prudery characteristic of a morally rudderless society. A society which loves to assert an image of it’s own purity and sanctity, whilst denying things could be better?

Rude & Nude ‘Nachlass’ by Alan Dedman, after Gustav Klimt – has been painted in oils over acrylic on canvas. The painting is approximately 30 inches in diameter. It is for sale and can be purchased on this site for £2,500.00 gbp, using the secure PayPal button below.

Terms and conditions of sale can be found here. Please leave your details including an email address on the contact form below the social media icons. Your details will not be publicly visible, all comments/additions are vetted by the site administrator.