Alison who I knew at St. Martins School of Art, praised ‘The Most Popular Art Exhibition Ever!’ by Grayson Perry when it was in London, saying ‘ it will make your heart sing’. Mike (a veteran of psychedelic Amsterdam during the 80s) proclaimed: ‘you must go and see the Grayson Perry exhibition at the Arnolfini in Bristol’ – so I went.

Warning: The text below contains strong language – not for moral pedants or the faint hearted.

I glanced across Perry’s bows as a piece of South London Wildlife during the 90s;  first handling one of his pots at a party, half-way up a tower block whilst swigging on a plastic cup generously filled with vodka. The artefact in question (I was told) bore the title ‘Cunt Power’. An unglazed piece of modest dimensions, made from terracotta like clay – labia carefully formed with once wet material, about it’s midriff. Years later at another party, I congratulated Grayson on having allegedly sold one of his pots to Elton John.

‘Cunt Power’ was I believe, named after an act by the ‘Neo-Naturists’ a female performance group created at St. Martins. Wilma Johnson, Christine Binnie and others would take the stage completely naked except for woad like decorations all over themselves, as if the Mysterons were up to their naughty tricks. At a gig in Soho they sang ‘Cunt Power’ whilst holding a silver chalice aloft – inviting the audience to sip from a brew of menstrual blood and red wine (so we were told), but it didn’t taste like it and no-one got hepatitis later. Good luck to anyone who can play the art market and come out tops – but let’s have a closer look at the Perry phenomenon. 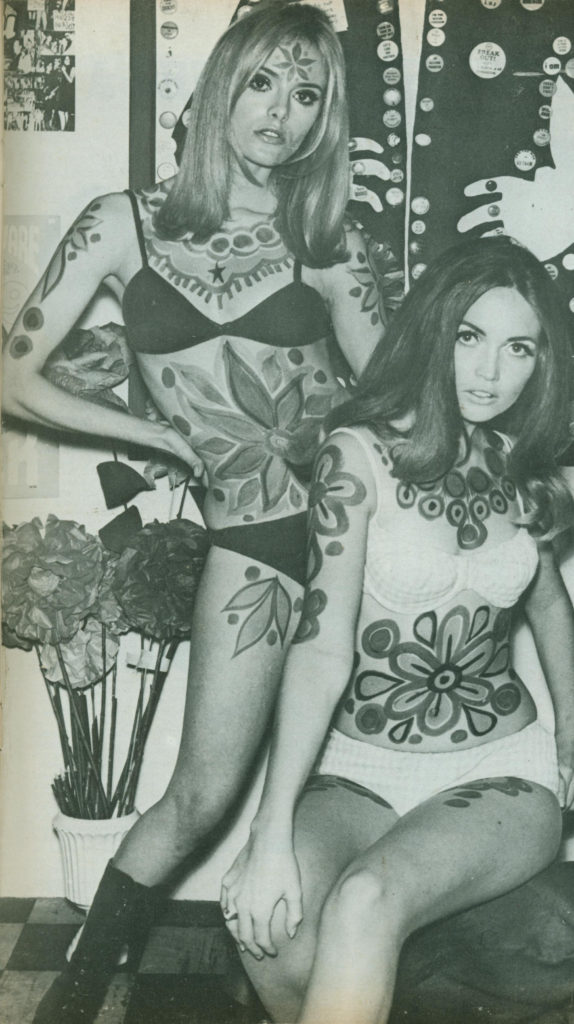 Pre-cursors of the Neo-naturists: 60s girls, painted – togged up.

I met up with a young Polish artist to attend the ‘Anal-phoney’ as often referred to by Bristolians, lowering the status of anything and everything to an acceptable level. I asked her what she liked: ‘Gay cats’ came the answer. Why? cos she likes cats. Simples. Nothing further to do with Perry’s schpiele under perspex plates. I bothered to ascend the stairs and found myself in a room exhibiting the ‘Digmoor Tapestry’. I decided to take an opinion poll asking an extremely tall hipster male what he thought – he liked the tapestries, liked the colour and was particularly focused on the lottery ticket in the artwork . But did he extract any further meaning? without reading the blurb? Clearly not.

Perry’s apparent curatorial stance towards men and masculinity needs looking at. For an artist who made a name accessing his feminine side by cross-dressing, his success still exemplifies the supremacy of white males under the auspices of an unashamedly elitist institution – the fine arts. 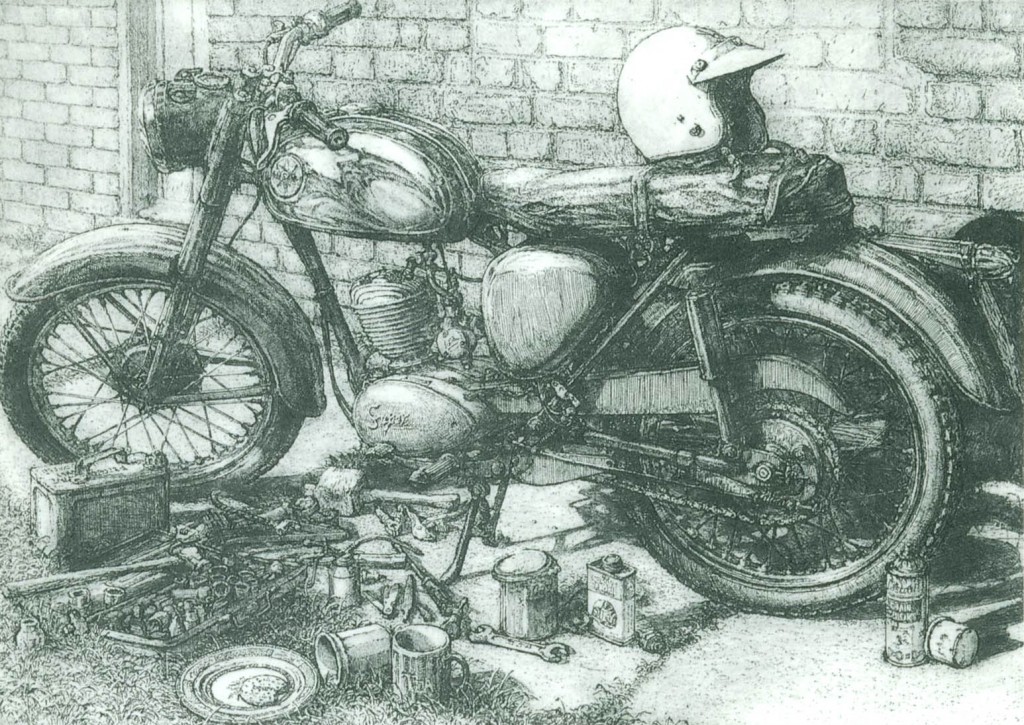 Motor- bikes can be said to represent the phallic aspect of modern man. Sadly, Perry chooses an American model as his metaphor. Decorated in a style similar to vehicles in developing countries, Grayson’s Harley signals the tone of the whole show – corralling a clutter of popular imagery, up-cycling it as art. Our teenage son was obliged to attend. I asked him what was good about the exhibition – ‘well there was a motor-bike’ came the reply.

The largest tapestry is a nod to Perry’s favourite painting about the Battle of Britain by Paul Nash. However Nash painted the whole of his work, whereas it is unlikely for Grayson to have sat at a sewing machine for hours fabricating a colourful, Beano-esque take on a similar theme – without the help of some elves. I recently spoke to a woman who served in fighter control during the battle: ‘I don’t know what we were fighting for’ she said, ‘Just look at the country now! What was the point?’

Nash’s testament is set in the English countryside. His links to Surrealism and attention to the landscape genre help make his work a quiet reminder of the peril we were in at the time – but we stood as one. None of the schizoid, disaffected, multi-cultural mess that is Britain today.

A more subtle invasion has taken place under the guise of political correctness. A mantra we are suicidally yoked to by our slave morality and need to conform at any cost. Perry offers healing in the shape of two ceramic pieces, wooing his fans with a conclusory statement that we are ‘more together than we know’, or something similar. 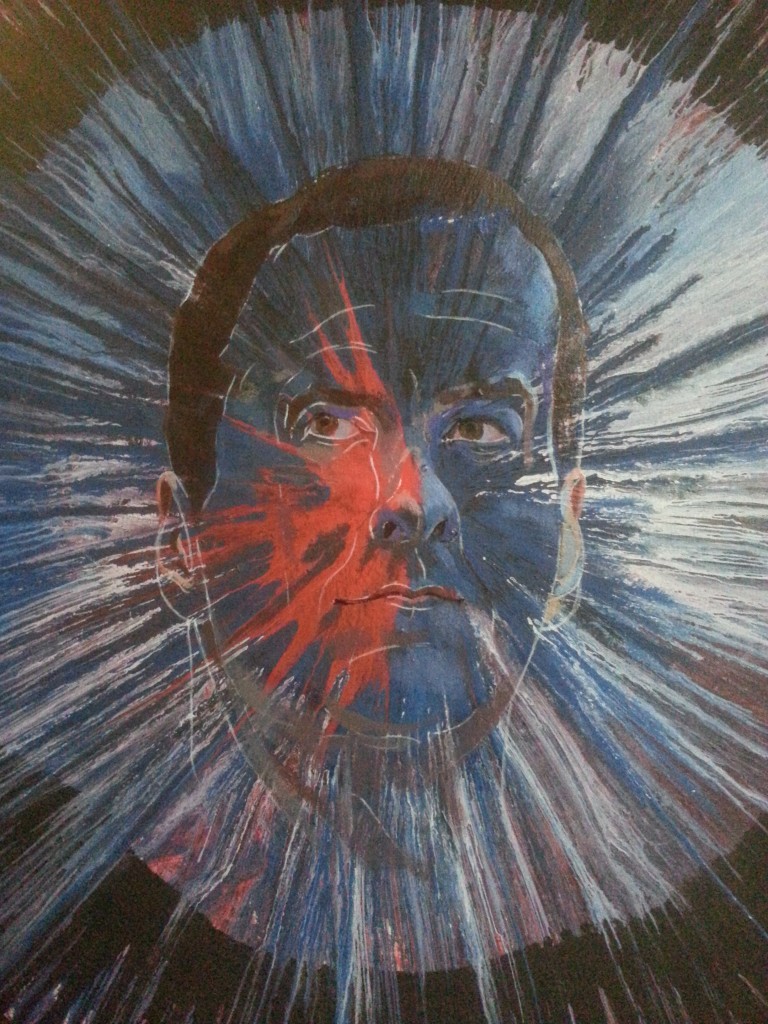 George in the cross hairs by Alan Dedman

Well that’s alright then! But what of the ruling elites who divide us? As part of a ruling elite of artists, Grayson Perry fails to point a gun at the culpable – and pull the trigger. Perhaps he could re-name his earlier piece: ‘Jeremy Hunt Power’?

He takes an oblique swipe at George Osborne by pasting an image of him into the glaze of a cock shaped ceramic piece – but it’s all so tasteful. Victoria Miro owns the lot, it seems. The public are told: ‘Do not touch’. The mechanism of capitalistic appropriation has done it’s work. Like the oo-er ness of Banksy (whose real name is Keith), any subversive co-opting has been co-opted.

At one point the Guardian newspaper (before it turned into a feminist comic) cited the withering statistic: ‘2% of the public in this country attend art galleries’. So how likely is Perry’s show to effect change?  Did it make my heart sing? The night before, I’d been running a men’s yoga group – part of our ritual is to stand in a circle holding hands, repeatedly chanting the sacred syllable ‘Om’. In a darkened room by candlelight this conjures imagery reminiscent of Plato’s cave. I pointed out the shadows on the ceiling, one of those moments that can’t be canned, owned or re-sold. My heart was already singing – thanks all the same.

‘Bantam Maintenance’ by Nick Ward RE. ‘George in the cross-hairs’ by Alan Dedman. ‘Pre-cursors of the Neo-naturists’ courtesy of The Look of London.