Born and raised in East Anglia, Alan Dedman attended Great Yarmouth College of Art and Design, St. Martin’s School of Art and the Royal Academy Schools. He went on to work as an illustrator and kept studios in Vauxhall and Hackney in London. During this period he made drawings from corpses post-mortem for illustrative purposes. After spending time in Asia he experimented with a move to the West Country; working as a lumberjack, he became chain-saw literate – pursuing further studies in applied biology and forestry at Cannington College, Somerset and Newton Rigg in Cumbria. 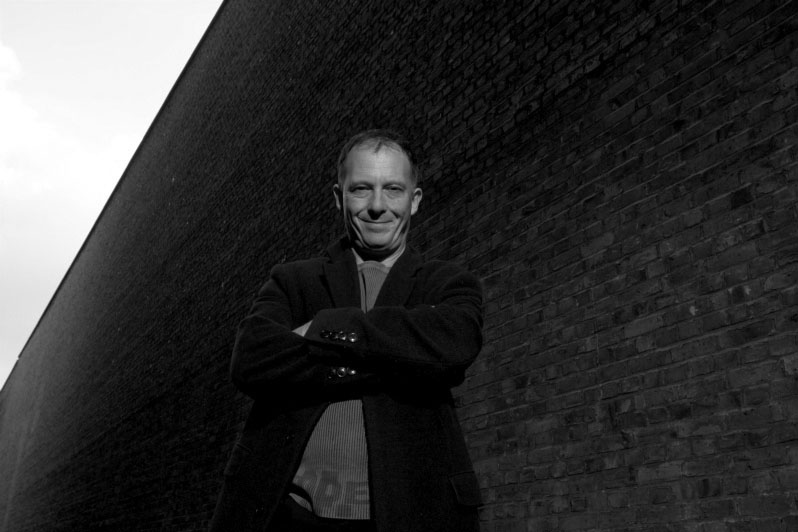 Alan by the wall, outside the RA schools

Dedman made several carvings and constructions before picking up a pencil again, though he has always produced sculptural and physical works. Today he keeps a studio in Somerset where his oeuvre ranges between a crafted Classicism and experimental post-post-modern works. The Classical approach acquired at the Academy Schools ‘is admirable but predictable’; his less conventional artwork satisfies his need to ‘make Art a process of discovery’. A founder member of the Fentiman Road School in London, he often cites the young Ian Cavens (who studied at Winchester then the Royal College of Art) when he used to say ‘I don’t know what I’m doing …..’ Persuaded to follow the career he has, Dedman feels artistic salvation can be found through an act of faith rather than design.
Dedman has worked extensively in Art education, beginning at the College of North East London in 1990, he went on to various part-time appointments, working with life-sentenced offenders in the prison service, tertiary colleges and private education; he has presented lectures at the Royal Academy Schools and contributed to the National Gallery curriculum. At present he works as a tutor for the London Art College, an on-line learning business. In 2006 he took a PGCE from Bath Spa University; in accordance with his beliefs about Art and education Alan Dedman has always eschewed full-time teaching, labelling it as ‘the death of would be artists’. Recently (2010 – 2014) he has concentrated on the human form.