In this age of Quick Buck Rules we would do well to remember those who have imparted their wisdom and learning as we career en route through the stations of life’s long (or short) journey.

Nicholas Ward studied at Lowestoft then went to St. Martin’s during the 1960s. After this he spent three years doing post-graduate studies at the Royal Academy Schools, where amongst other things, he was awarded the Eric Kennington Prize for Drawing.

An avid British motorcyclist, Mr. Ward’s work has always been based on his love of drawing as inculcated by the Greenham era at the RAS. Ward has produced many etchings and owes his early interest in the medium to the input of staff at the Schools, especially Jackie Biddulph. Below is an example of his work: ‘Bantam Maintenance’, etching and aquatint. To see a comprehensive online show of Mr. Ward’s work, visit: http://www.birchamgallery.co.uk/magazine/nicholas-ward-etchings/ But do come back sometime! 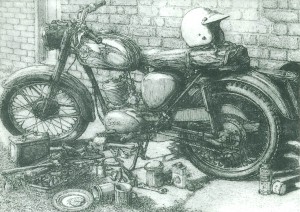 Ward left London and settled in his native East Anglia, where he taught drawing to students at Great Yarmouth College of Art & Design. He is best remembered for his relentless pillorying of the late caretaker George Mather – and for always being willing to demonstrate what he was ‘going on about’.

Nick Ward currently lives in East Anglia with his wife Liz. He illustrates for Classic Bike Magazine and has become an RE (not Religious Education).

Tim Martin has recently announced along with Hazel Terry – that Barry Drake, etching and print-making tutor of the former GYCAD has recently passed away. To all Barry’s family we send our heart felt condolences. In time we shall remember Barry’s charm and kindness and put further posts here to remind us of this. For now, anyone with a comment, memorabilia etc. who would like to add to this blog – please contact admin through the site via a contact form at the base of any blog on the main page.