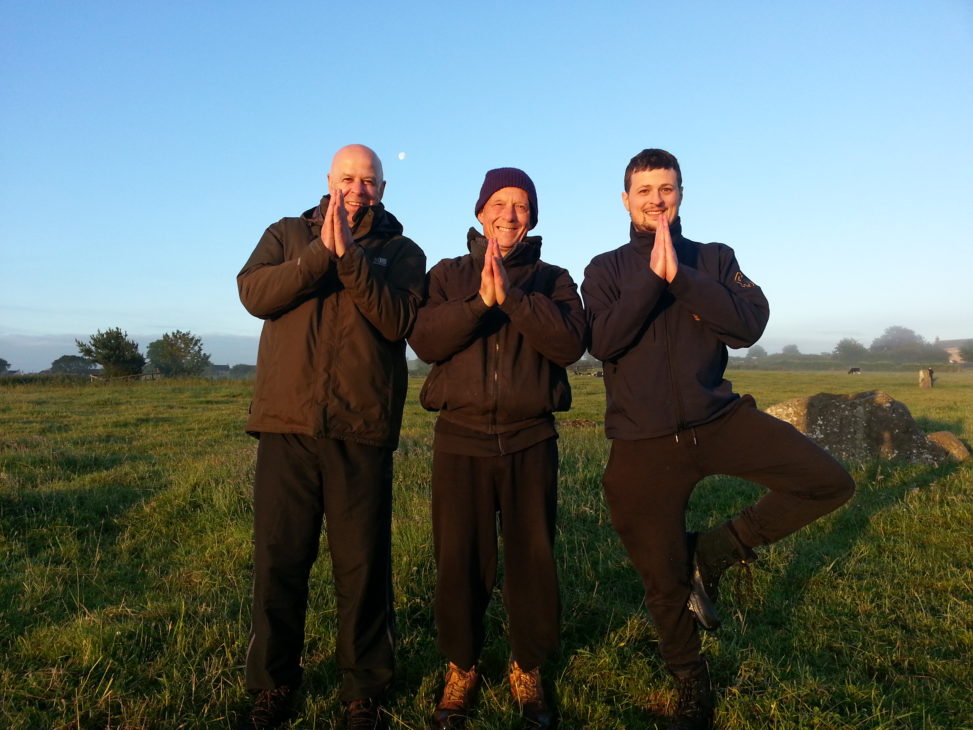 Summer Solstice yoga: on June the 21st 2019 members of Yoga for Blokes attended celebrations at Stanton Drew stone circles in Somerset. Unlike the previous year, it was a chilly morning. Nevertheless people were sleeping next to the stones and camping in nearby fields. Folk were arriving from 3 am onwards, two women had already been at Glastonbury Tor – but said it was ‘a bit rowdy’.

An assortment of Druids, Hippies, Freaks and the Curious showed up including ‘Cossacks’, some stone hugging day trippers and a ‘Wizard’ in a pink gown plus a babe in arms. The ceremony took it’s usual format. A large assembly of people joined hands within the lesser stone circle and were blessed with fire and water (from the Red Spring at Glastonbury).

The friendly, peaceful event is worth experiencing – so long as you can endure an early start to the day. This year passing of the oaken crown around the circle didn’t take place, nor was it pierced with a sword. Druid ceremony includes mention and use of natural phenomena such as trees and wildlife native to the British Isles. A loose form of chanting took place (similar to the sort used at Yoga for Blokes) along with the Druids prayer and vow. Gateways to the four points of the compass were opened and closed.

After which – though feeling the chill, casting our yoga mats amongst the cow-turds (which come in handy for Sahajoli), we performed Suryana Maskar to the rising sun.

My first encounter with this vinyasa was in a church hall amongst a group of women. The person running the class often uses the sequence. However, some of us noted we found it hard to sleep afterwards. Suryana Maskar – I’ve been reliably informed, was invented in India, to help channel the emerging sexual energies of adolescent males. Interesting to see it used amongst a group of middle aged to elderly women.

Since practising Summer Solstice yoga to the rising sun we noticed how well it works in the mornings. Suryana Maskar certainly energises practitioners and is perhaps less appropriate in the evenings before going to bed. Coupled with Solstice celebrations at Stanton Drew, it makes a fitting use of Hatha yoga in this part of the World.