Damien Hirst’s art often relies on a gimmick or two; his spin painting for example –  a fad introduced by the children’s TV series ‘Blue Peter’, re-presented as ‘high art’. Nonchalant, spurious commercialism – call it what you will, if he was less superficial, we might see this aspect of his oeuvre better developed.

Painting at the Royal Academy Schools

Post-graduate students at the Royal Academy Schools indulge in a deeper engagement with themselves and their Art. At the Schools I abandoned ‘authentic realism’ to explore the vagaries and nuances of painting in all its physicality. Due to an emphasis on European Academic tradition (drawing and painting the nude), I stockpiled skills and experience concerned with making ‘real’ and ‘authentic’ images, using traditional media. 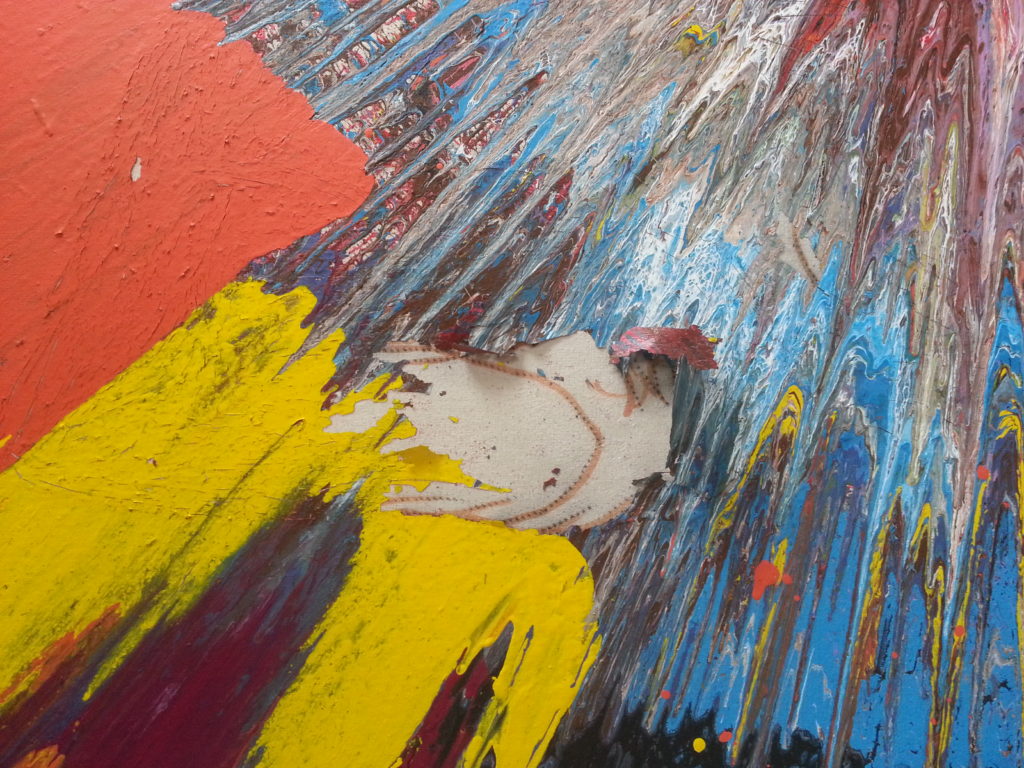 Following in the footsteps of an Irish/Japanese student called Sean O’ Brien
(I literally took over his studio space when he graduated), I enjoyed flinging buckets of paint about and created heavily layered collages. This seemed mindless but since, I have utilised themes of Gothic rebellion combined with Classicism to create Art. The best things happen when there is a balance between Dionysian and Apollonian elements in the process.

I am grateful to Damien Hirst for popularising spin painting. In recent years I made and used three different contraptions for my work. A colleague from
St. Martin’s suggested putting figures into spin paintings. This is an example of one of my latest and largest works. 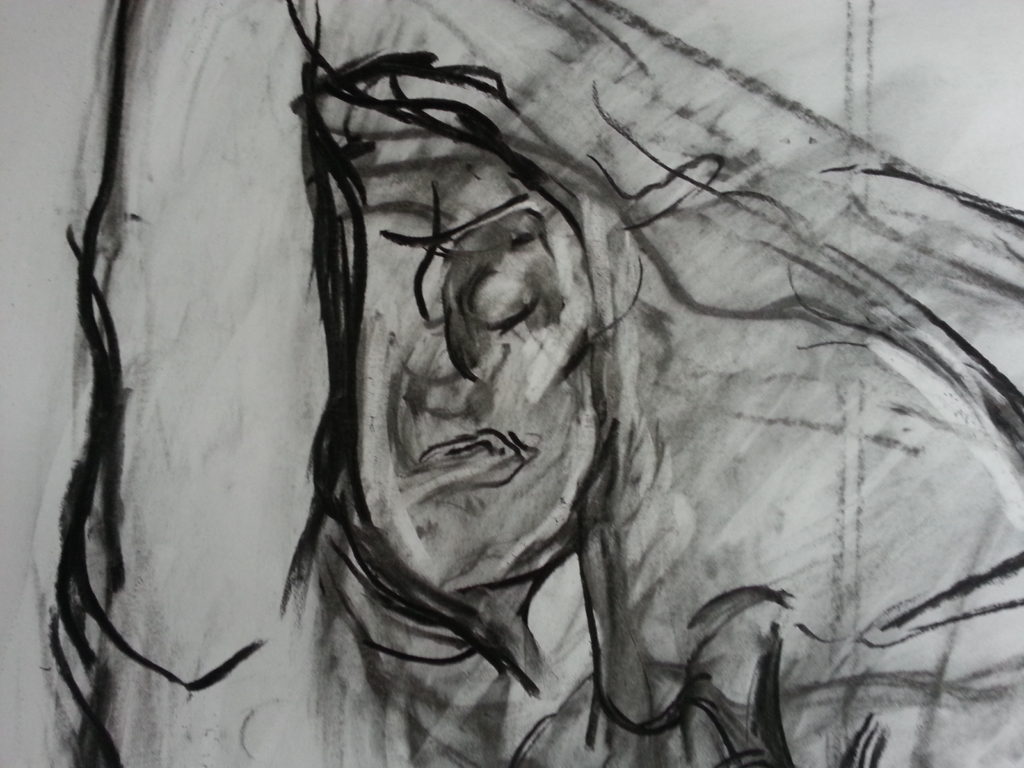 Detail of drawing by Alan Dedman

I recently showed this painting at studio1.1 in Shoreditch, London, England. It was well received – described as colourful and striking by people who attended the exhibition including the BBC radio 2 DJ, Nick Grimshaw. 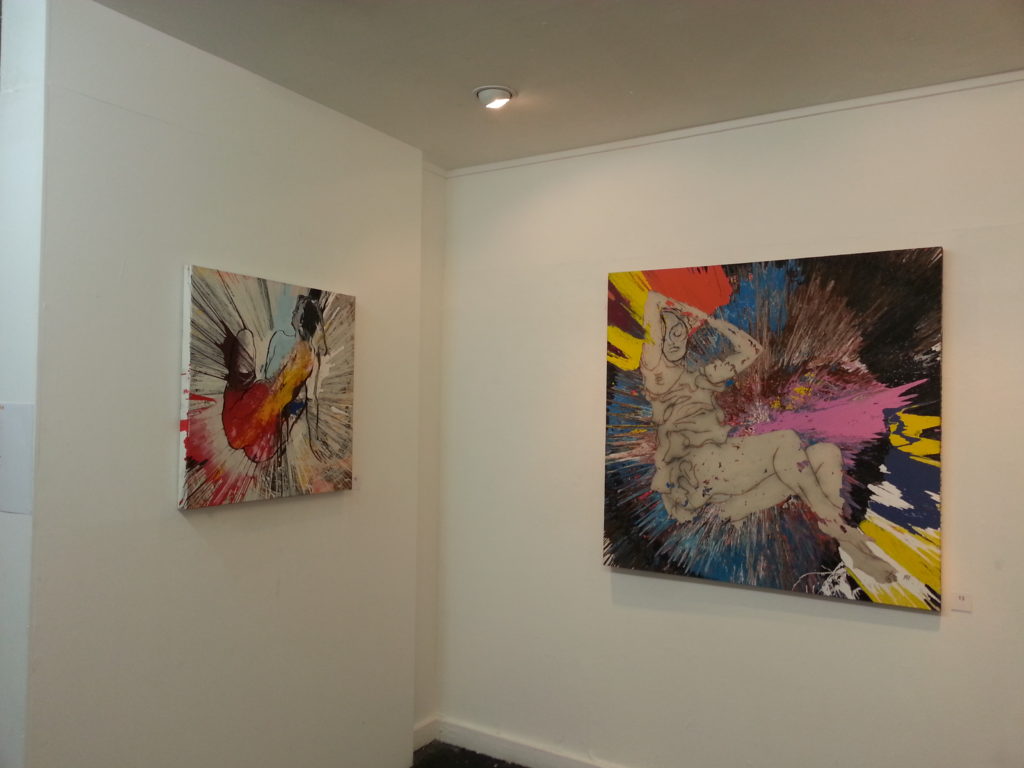 Method for creating the painting

I perforated line-work with a pattern cutter’s spur, then pounced charcoal powder through the holes onto raw canvas (an ancient technique). I fixed the dotty drawing, bolstering its line with Burnt Sienna. Next I used Roberson’s acrylic canvas sealer to protect the ground from an isolating varnish of petroleum jelly (vaseline) – applied to the surface, once dry. At this stage the image could easily have been a piece of nose art for an American bomber during World War II. 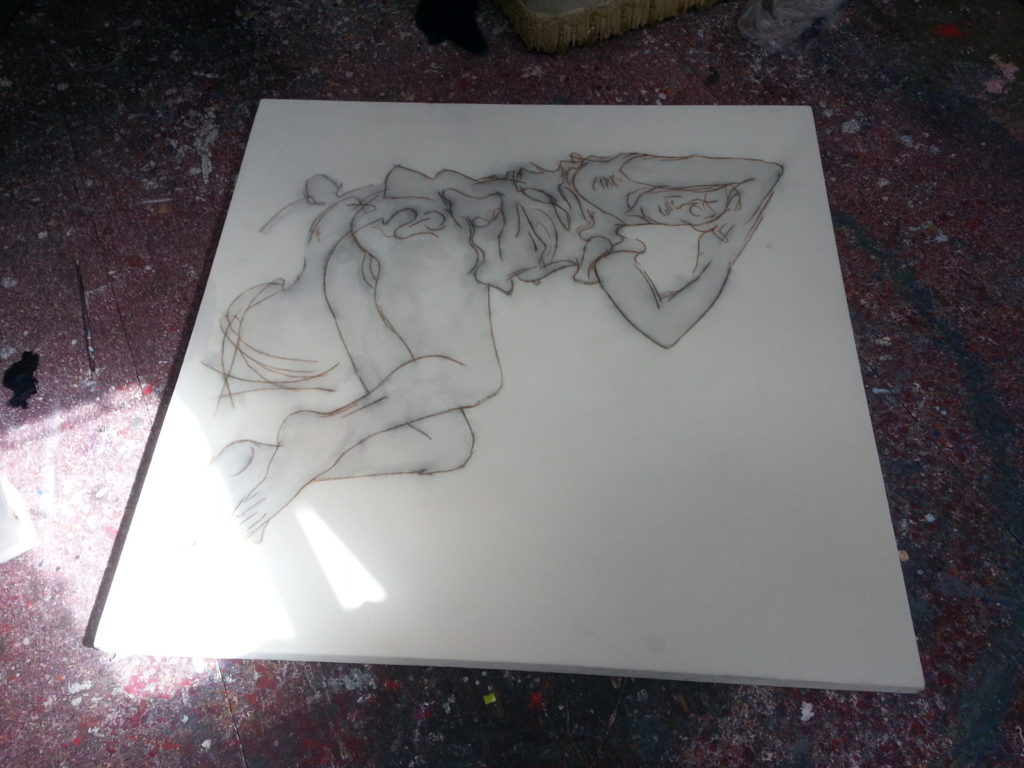 Spin paintings are fun, but costly  – requiring organisation of materials, resources, time – and focused input . The stretcher is fixed to the tray of Contraption Mk II with screws. Spun at varying speeds, I saw several changes of colour occur during the process. 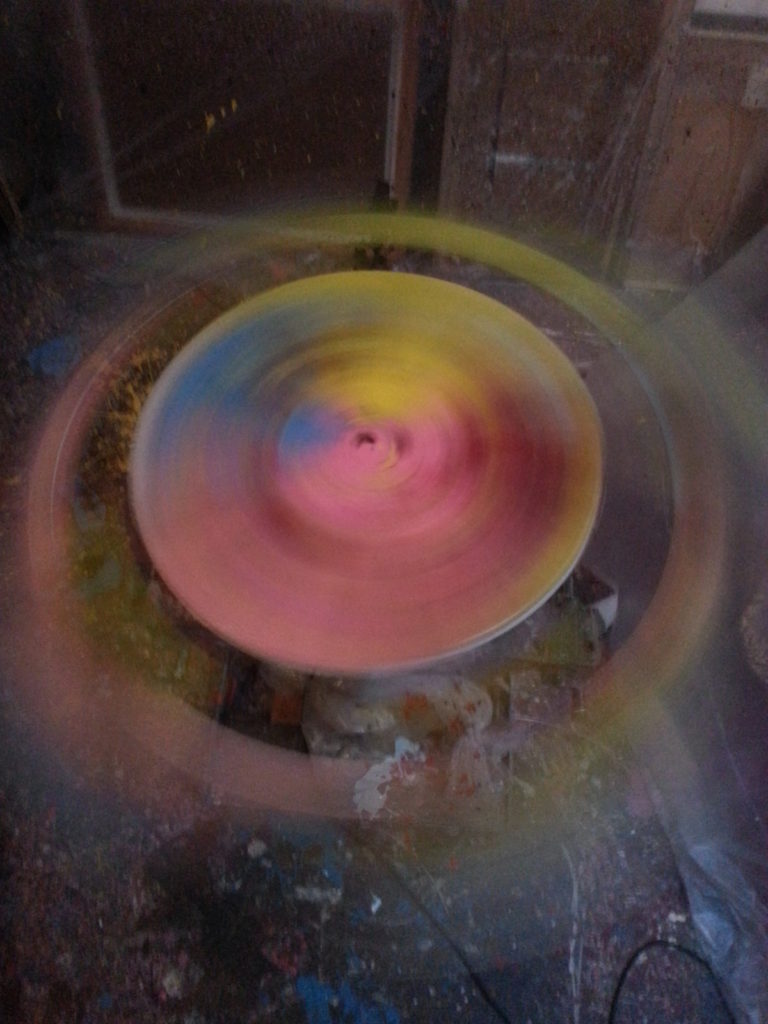 Watching a painting as it spins; letting the image settle in your mind afterwards is beguiling. There is a lot of change taking place and the usually slow, meditative activity of conventional painting is altered and challenged. 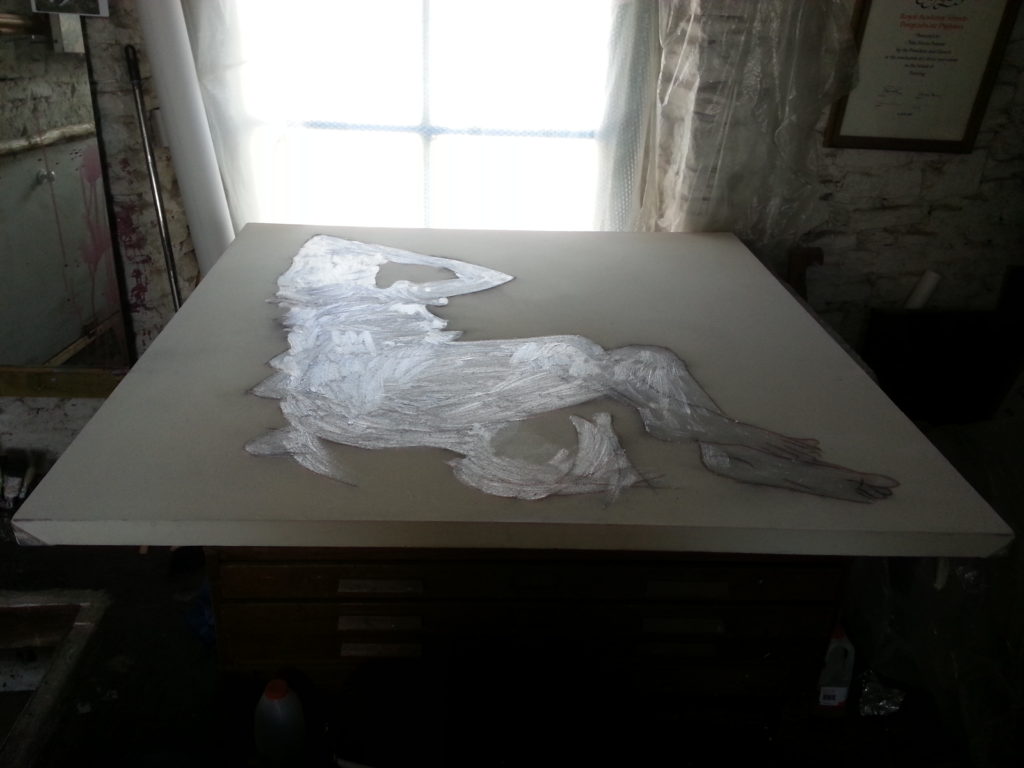 Isolating varnish of vaseline on canvas for spin painting

During the drying process cracking and blistering occurred over the isolating varnish. I lifted paint gradually, to reveal the drawing beneath. Then I didn’t know what to do. I drew into the Adele’s face some more. People visited my studio and responded; I was persuaded to keep it as is. The ghost of Adele Bloch-Bauer is suspended in a violent, energetic blast of colour. Gustav Klimt, Alan Dedman and Damien Hirst meet her and each other, on this unique canvas. 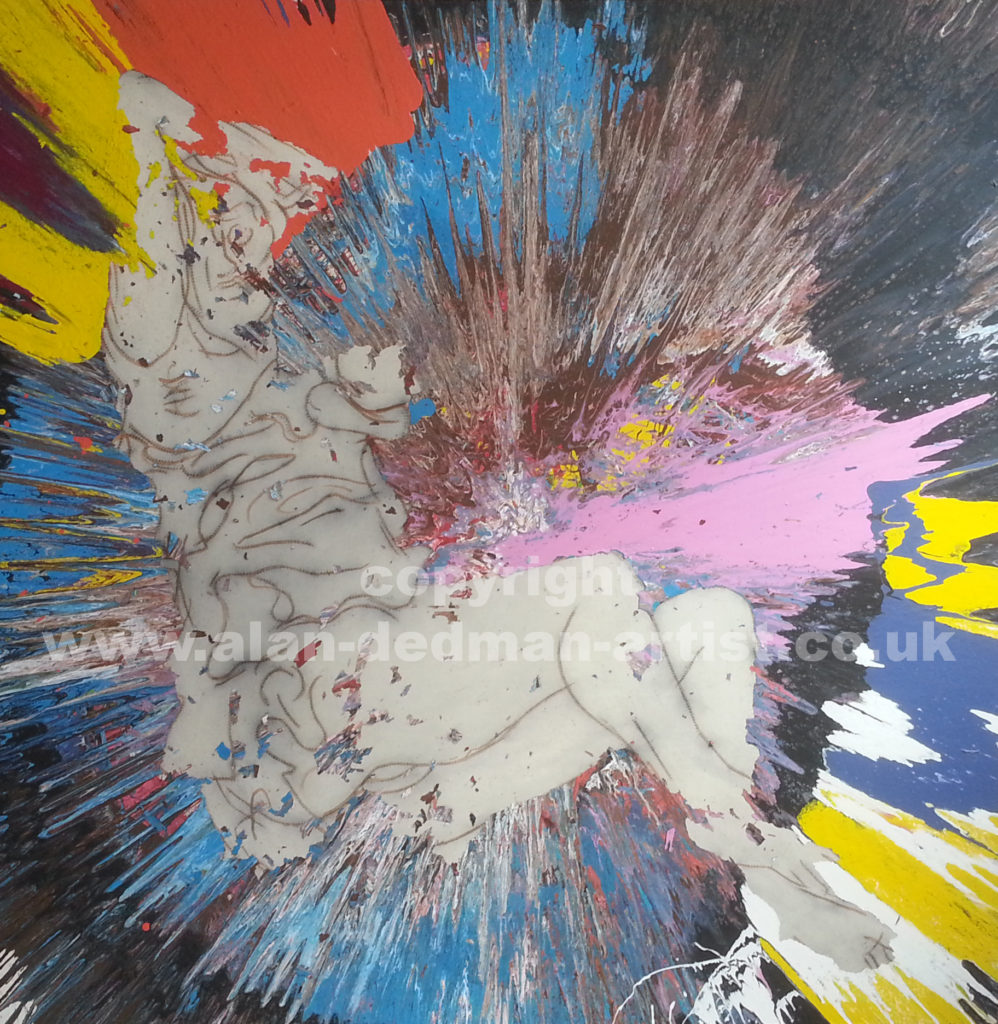 If you would like to purchase ‘Spin painting with Klimt, Dedman, Hirst and Bloch-Bauer’ by Alan Dedman, please use the PayPal button immediately below, leaving your details on the contact form under the social media icons. This information will not be publicly visible.