My first encounter with Roderic Barrett was during interview at the Royal Academy Schools. We sat opposite one another in the Keeper’s office. Barrett was wearing a waist length denim jacket – which had seen some service. He  wore the same garment when he interviewed Nicholas Ward during the 60s. ‘Difficult, isn’t it?’ – his first question. Assuming (correctly) he was referring to painting and drawing, I answered ‘Yes’. After which we seemed to correlate. He loaned me a copy of his brother’s book: ‘Early to Rise’ a documentary about farm work before mechanisation. The text ended abruptly – as if to dispel any sort of romanticism. 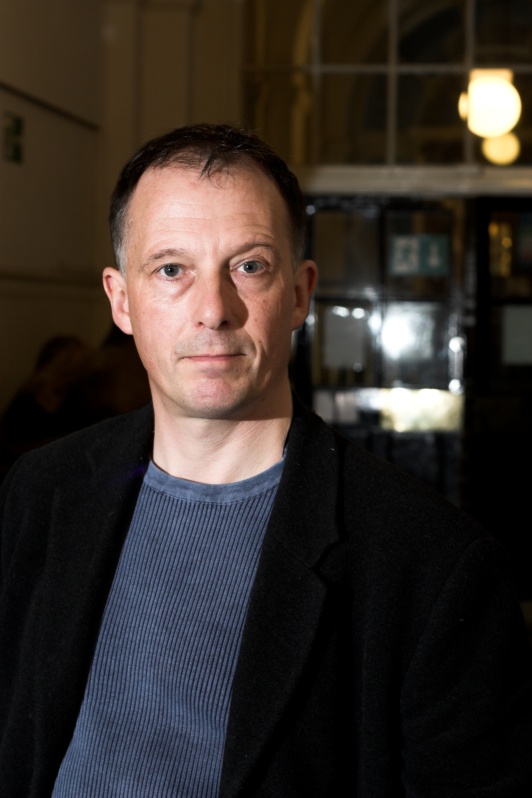 Alan Dedman in the corridor at the Royal Academy Schools

Michael Knight another post-graduate student at the Royal Academy Schools, was eager to satirize Barrett, after he walked into one of the back studios, rubbing his hands together ‘Suffering are we?’ Barrett said gleefully – as if that was a good thing. His adherence to Quaker principles seemed to give him a morbid fascination for the Medieval. Roderic pointed out how waggon wheels (included in a South London landscape I drew) were used to ‘break the prideful’ – see Heironymous Bosch. Like his clipped English diction, Barrett’s modus operandi was all about restraint.  An avid tennis player, Roderic also liked the pianoforte. His predilection for tonal music (Bach etc) was something he had in common with the Keeper of the Schools, Peter Greenham RA.

Barrett’s enthusiasm for such music didn’t seem to translate well into the visual arts. I recall a fellow student – Jonathan Ellis, working on a close up of a model’s head in the life painting room. Cath (an Irish feminist) had a bob of dark, curly hair. Ellis chose to render the phenomenon in bright, cheerful colours – a right tube of Smarties. I liked it. After consultation with Roderic, it was as if someone had tipped a bucket of gloom over the canvas – dark, sombre tones – not dissimilar to Felix Vallotton’s ‘Sur la Plage’ appeared, wresting all the joy from Jonathan’s efforts.

The mood in Vallotton’s painting reflects an atmosphere at the time of it’s creation: pre- First World War, Edwardian. What was going on here? a century later? Roderic’s attendance to the principles of the Society of Friends (Quakers) meant his aesthetics followed suit. On the matter of chroma alone, John Ruskin was critical of Quaker aesthetics for ‘denying the beauty of colour‘. Somebody called Francis Galton claimed: ‘Quaker opposition to the fine arts and dressing in drab had blunted Quaker visual faculties sufficiently for colour blindness to become a feature of their race’. However, Professor Thomas Puttfarken reminds us of descriptions of Barrett’s work as ‘having great beauty of surface and richness of colour‘. 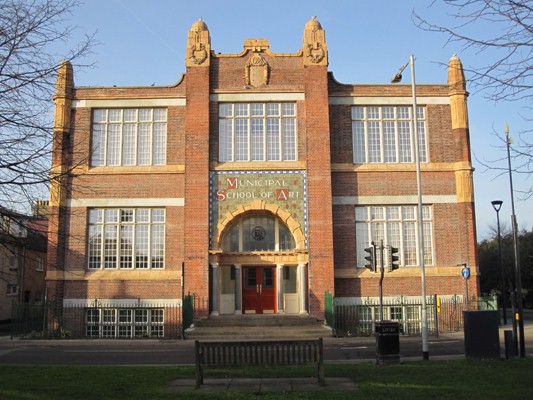 Needless to say, colour theory and it’s application wasn’t on the agenda much at St. Martin’s or the Royal Academy Schools. The inference was that it should be intuitive. At Great Yarmouth College of Art and Design (GYCAD), foundation students were taken through a series of talks and exercises (mainly based on Itten’s: ‘The Elements of Colour’), by DC Mace. All well and good – but after a week of this, the final exercises were ‘academic’ resulting in an A2 sheet with coloured squares, reaching out into nebulous mists of white cartridge paper – like a creaky bridge going nowhere. Such exercises might tick boxes within a scheme of work but as to their practical application and use, there was insufficient follow up.

Barrett was good enough to invite myself and Javaid Alvi to his home in Essex. We stood in his studio (a converted chicken hut), the coir matting gave it a ‘churchy’ smell, what with the paint, mixers and diluents. The light was good. First Roderic showed us a painting of a skull – very serious. The Cézannesque brushwork and careful use of tone were ‘competent’ – this was his benchmark. Next he showed us work which so often appeared in RA Summer Shows. Weird, grey figures with black holes for eyes (owing a debt to late Lowry) – clumsy dwarves, as if fashioned from clay, inhabited shallow spaces with stage like lighting (see ‘the Players’).

They were tonally organised – but what was Roderic Barrett trying to articulate? Aptly named ‘John the talker’ by Mike Upton, ‘John P’ cynically referred to Barrett as ‘the sex dwarf’ – but not irrationally. In one painting Barrett included ‘a citizen of Middle Earth’, groping the breasts of some sort of pudgy Tinkerbell. During our visit, Roderic shared one of his treats with Javaid – a Rothman’s King Size cigarette. Barrett would only reward himself with a Harry Rag after so much painting. Shame really, because inevitably they did for him.

The last time I spoke to Roderic, he was on his death bed. ‘How are you?’ I asked. ‘Alan, Alan …. I’m dying dear boy.’ Roderic had bone cancer. Well into his eighties, he oversaw many generations at the Royal Academy Schools. Peter Greenham RA asked Roderic Barrett to teach for two days a week at the Schools in 1968. He left in 1996, by which time Leonard McComb had become Keeper. Barrett carefully kept records about each student – which were discarded by one of the Keepers during the 90s – new broom – new junta.   So what was his legacy?

Apart from our East Anglian roots, Roderic Barrett taught Nicholas Ward RE, who tutored us at Great Yarmouth. The cross-pollination and interleaving of tradition between ourselves is what matters. Barrett attended Central School of Art and Design in London from 1936 to 1940; he was 15 at the time he started. He learned drawing from William Roberts and Bernard Meninsky and practiced wood engraving. Artists and illustrators like Eric Ravilious, Eric Fraser et al, represent the mood and style of that time.

One of the more interesting interactions I had with him in the Life Room, was when he suggested I cease using lines to fashion an image of the phenomena before us and ‘start with the belly-button’ – that changed things.

As for his paintings ….. ‘Brown Bird’ (painted circa 1950) shows us two figures with mask-like faces, black-holes for eyes. The same formula is applied to most of his figures across the spectrum of his output. Without fully articulating all ‘the windows of the soul’ express, Barrett’s figures remain a bit creepy and malign. Cartoon like. During my own teaching career I’ve noticed beginners invariably fluff or avoid depicting a model’s eyes. 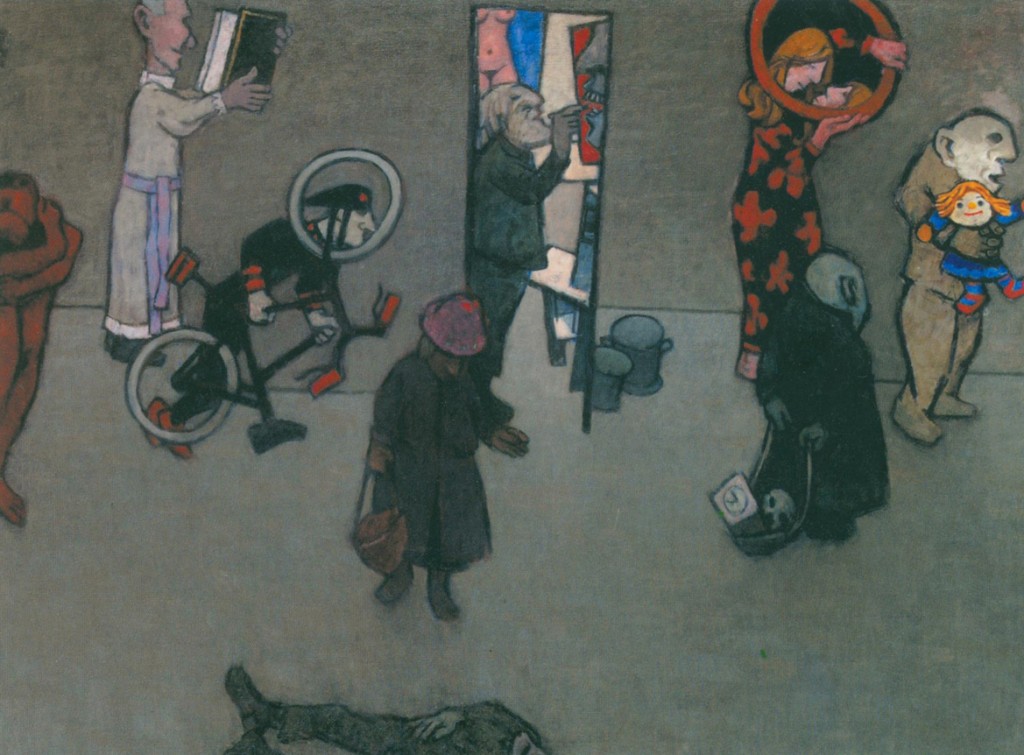 The Good Samaritan by Roderic Barrett

The need for deference between himself and his students in the teaching/learning continuum created a culture of submission – which doesn’t help anyone progress beyond the confines of art school. His efforts to advise students about galleries and commerce were as close to business studies and marketing as the Royal Academy Schools got in those days. At least he had the conscience to try.

In her appraisal of him Sister Wendy Beckett said ‘Barrett never glamourises’ – but with all it’s inverse snobbery, glamour is often characteristic of success in the Fine Arts. He said of himself ‘I’ll never be a great painter, because I don’t live during great times’ – the limitations (restraints) we place on ourselves are often all there is between achievement and mediocrity.

Photo of Great Yarmouth College of Art and Design by N. Ward

‘The Good Samaritan’ from Roderic Barrett by David Buckman