At the Royal Academy Schools, under-graduate tutor Mike Upton was a strong advocate of still-life painting – because students can work from observation, inexpensively. Compared to working from life (the nude), still-lifes are less demanding. The still-life as ‘art commodity’ has it’s value. Small, humble paintings of this sort are saleable, more so than grandiose statements in other genres and are often sought for the domestic market.

Frequently students put more effort into selecting objects and setting up a still-life than they do painting from them. Directing, sustaining and controlling creative energy in this respect is challenging.

The National Gallery in London houses some fine examples of Dutch still-life painting by the likes of Pieter Claesz, Willem Kalf, Rachel Ruysch et al – demonstrating artists ability to represent the World as it was seen. Today artists don’t need to do this, though often people seem to want to paint ‘realistically’.  A still-life should be a starting point for creative adventure and expression. Making an accurate 2D representation of reality seems to please many students and collectors but ultimately there is less mileage in this sort of exercise. 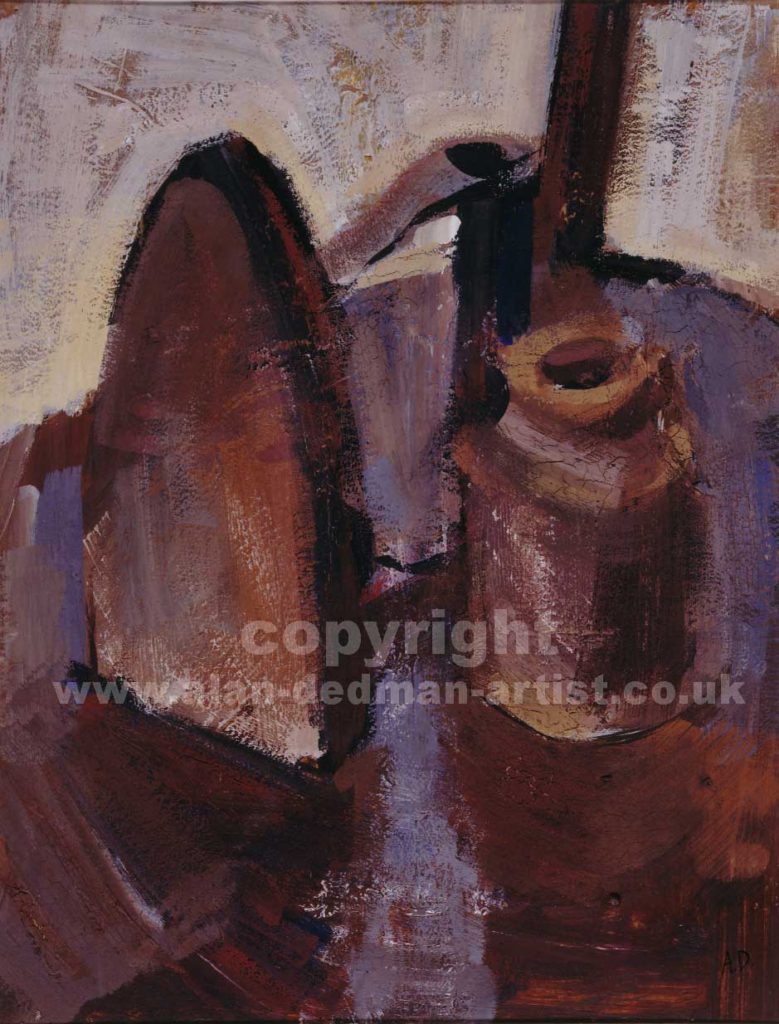 Above is an example from a series of artworks based on the still-life. In this painting I have used an earthenware pot and a flat-iron set on a chair. Objects receive emotions and a story is projected into them. They can be likened to two characters; my girl-friend and me, scrabbled together by life in a South London squat.

The earthy palette gives it a classical tone and the dishevelled brushwork has ‘air’ in it. This rough hewn statement conjures an atmosphere of the 1900s when hansom cabs, rather than diesel powered ones would have plied the streets. On the varnished seat of the chair, French Blue reflects the London skies outside. The painting is about togetherness and uncertainty.

I worked with gouache paint; completing it following a lengthy pause. I abandoned  the work after getting ‘stuck’. Three months later I added a few touches – rejoining my efforts. Suddenly the painting was finished. Who knows if the hours spent before made it or whether a swash-buckling tickle was the answer – both, obviously.

I produced a series of related screen prints at ‘the Block’, a community centre near Elephant and Castle in South London; printing a computer generated drawing over coloured paper. This allowed me to see potential colour combinations in my subject matter. Presented together, the gentle, scrofulent charm in the work becomes apparent.