In May 2014 Zoe Pilger wrote an article for the Observer online titled ‘Why such a scandal over a nude painting of a Cambridge Academic ?’. Apparently, ‘the stir caused by Victoria Bateman’s portrait (painted by Anthony Connolly) raises serious questions about current attitudes to women’. Does it? Zoe Pilger’s article makes a meal of women’s issues and fails to address the wider concerns of Art, Humanity and the Artist. She doesn’t say anything about Anthony Connolly’s experiences or intentions, sidelining him as an irrelevance in the wake of Victoria Bateman’s attention grabbing stunt for the media.

The internet is a strong influence, affecting the way we see and portray ourselves. Freedom of the web allows collective consciousness to grow, but like all unregulated ‘markets’ the potential for negative consequences is great. So it is understandable that women want to exert some control over the way they appear; but in the new age of prudery and preciousness how far is it necessary for them to go? Painting and drawing the nude is something which has always gone on and there is more to it than Ms Pilgers article suggests.

Working from life in the cloistered comfort of an art school is one thing – it is a completely different matter away from such cosy circumstances. In this frenetic drawing of a nude female model I record the insecurity and anxiety of our lot together. At the time I kept studios in squatted premises in London. The rawness and uncertainty of the situation shows in rabid pencil marks, scratched into the surface of the paper. Posed Christine Keeler style on a wooden dining chair, she looks worried – peering out from under her hair. I’m not concerned with voluptuousness or sensuality. The chair forms a forbidding grille across her groin – it is her face and personality I’m most interested in – her humanity. 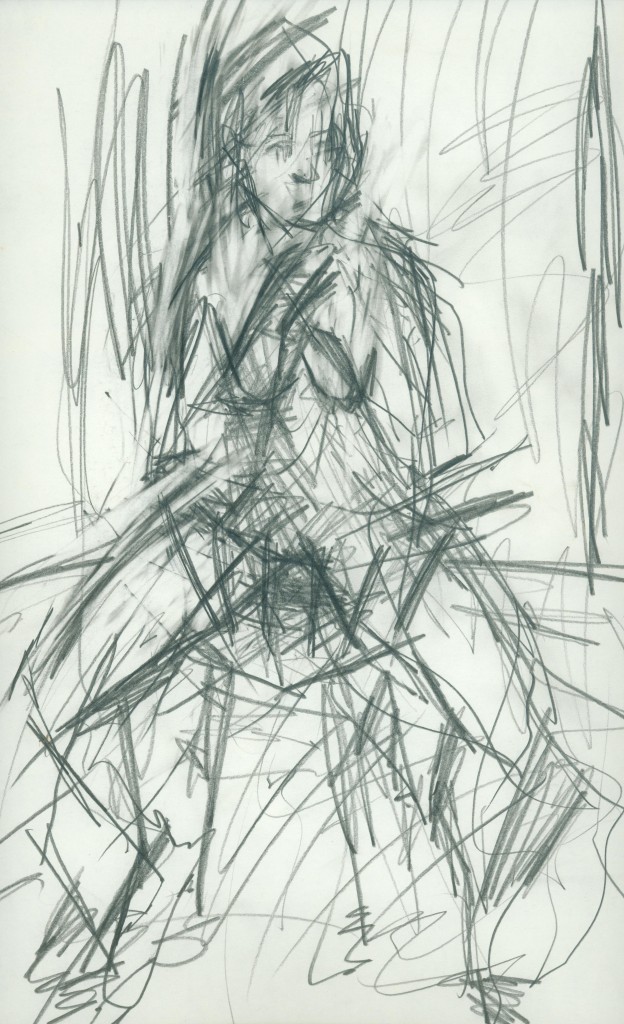 Drawing of a nude model by Alan Dedman

There is an increased level of intimacy between yourself and a model when working this way. Male or female, the person you are painting is for your eyes only. In fact it is more difficult hiring and working with a model of the opposite gender, particularly outside London where blinkered parochialism frowns on anything un-utilitarian or ‘naughty’. 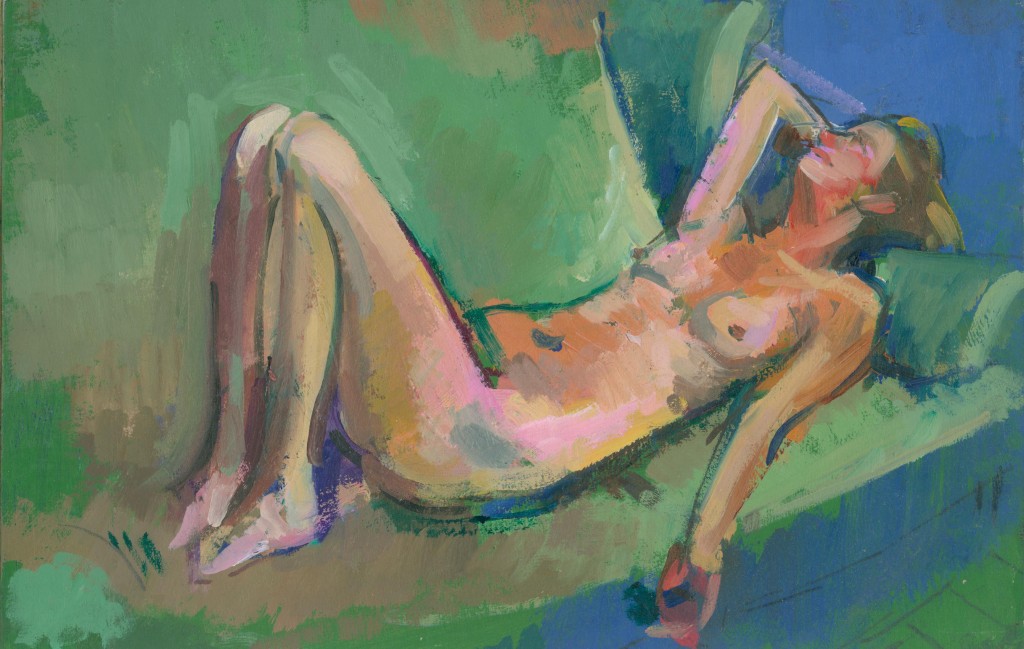 In this painting (reclining nude) my model was hired; I wasn’t intimate with her. Our interactions were formal, professional and businesslike. She said she felt as if she had ‘just fallen there’. A colleague who studied at St. Martin’s alongside me, said he thought I had painted her body ‘too long’. But after relaying this to the model she said the painting was fair in terms of proportions – she had an abnormally long abdomen. Compared to Etude where I had been intimate with my model, the above painting is unremarkable, a study in the manner of the Academy Schools when Peter Greenham was Keeper. I like the use of high key colour in the flesh tones and the fact I managed to record  facial features – something which I always stress when teaching life drawing. The cost of hiring a model can be prohibitive – so I chose to make the painting small (8″ x 5″ approximately). This meant I concentrated on process and spent only a modest amount on materials. 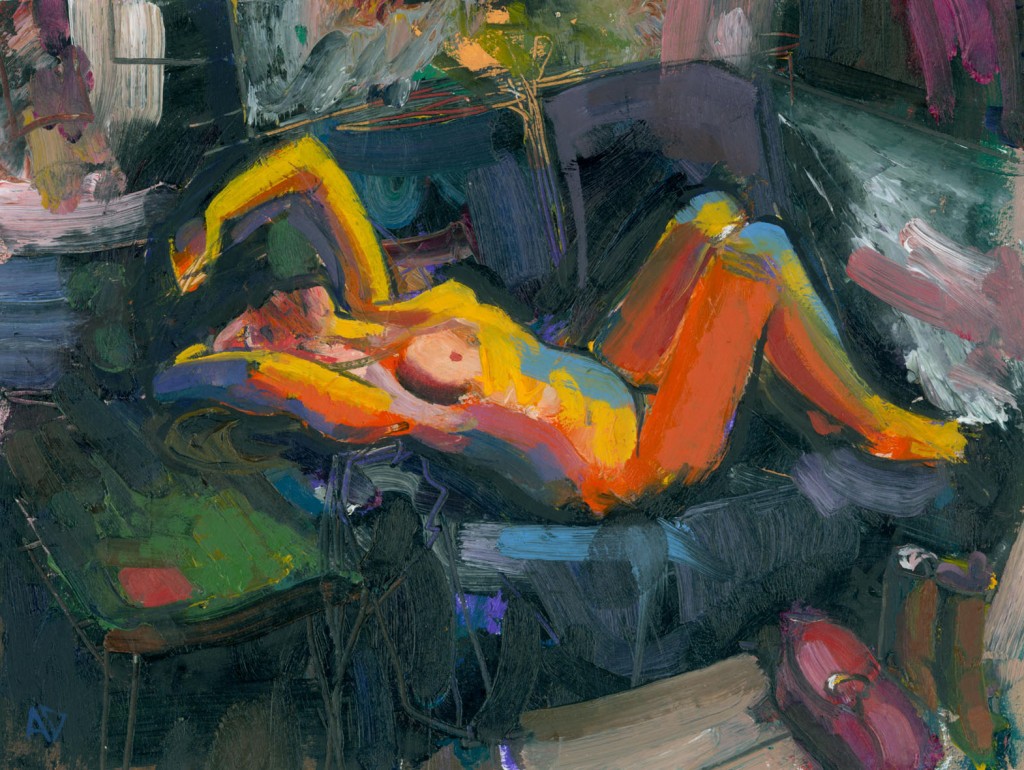 Ms Pilger concludes her article by suggesting ‘the new wave of feminism’ is going to change things so that culture is no longer saturated with images of women inviting sex. When I discussed this with one of my male models, he suggested the reason there are so few painted images of the male nude by female artists is because ‘there ain’t no money in it’. Later he mentioned a tv programme; the women interviewed said they most preferred a moving image of the male form, engaged in an act of seduction – different to the posed, still images that male painters make of female and male models.

However if men and women can’t relate to each other because sexuality is censored by the Thought Police and barking dogs of the media, then what kind of World is being created? In her article, Ms. Pilger mentions John Berger’s droll book ‘Ways of Seeing’ but doesn’t acknowledge his outlook fails to offer a meaningful alternative to the pzazz of capitalism. Empowered or not, all people who collude in making sensational images are culpable once the Thought Police are on the case. Designer babies, surrogate mothers – germ free adolescents? No more acne, periods, semen and all the other ‘ugliness’ characteristic of humanity. No more shared responsibility and awareness between the sexes. Just a nice, clean, efficient machine.