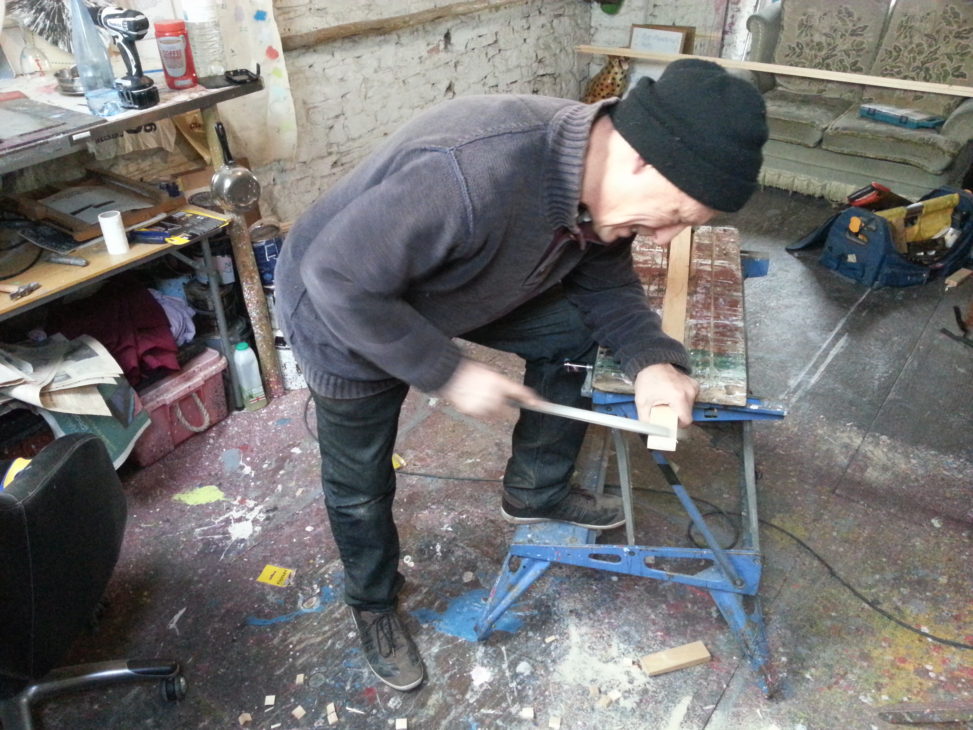 Thames TV – going large for them, by Alan Dedman

During December 2018, Thames TV asked if I would create a painting for one of their programmes – Britain’s Got More Talent. Every now and then a carrot like this gets dangled before me; each time I learn a bit more about how to work the process. Thames TV said they couldn’t afford to pay much if anything (the inference was) for the ‘privilege of working for them’. It was another case of biting the bullet for the sake of whatever publicity might be gained.

Thames TV asked me to consider making a copy of Leonardo Da Vinci’s Last Supper, into which the cast from Britain’s Got More Talent had been worked. Figures, portraits – my kind of thing plus 2019 is the 500th year since Leonardo’s death. I’m not a fan of talent shows; Hughie Green and ‘Opportunity Knocks’ could be just as entertaining if not more so, than some of the absurdities poured into our living rooms by Simon Cowell and his cabal, but I could see the potential in the job.

Apart from the fact they wanted the finished artwork to be 1.5 x 3 metres in size, I had misgivings about generating content which might be offensive to the viewing public. But the show must go on. Over Christmas I wrote to Thames TV; during the early weeks of January 2019 we agreed to work on the project.

The first issue to address was the practicality of such a painting within the confines of my modest studio space. A stretcher could be built there – but how to get it out was the real issue. The simple answer was to open up the floorboards.

It was do-able but meant I had to work rapidly to meet the deadline. Normally I buy canvas and other materials from Russell & Chapple in London, but they couldn’t supply me with what I wanted fast enough. So I had to build my own stretcher and stretch canvas over it (a technically difficult task on such a scale).

I had the canvas ready to work on in 48 hrs. Anyone with experience of these things will know that was fair going under the circumstances. So much can go wrong, if it’s not done properly. Then I set about making a drawing according to the brief I was given by Thames TV: which became more leary as producers gave voice to their wild imaginings. One thing they wanted was for Amanda Holden to appear topless. So I asked if they would send her down to model. But my request was declined.

The drawing was approved. Then I used a digital projector to transfer my cartoon to canvas. I kept the original ‘Sacred Geometry’ grid. Artists like Leonardo Da Vinci would compose their paintings around a strict mathematical formula. That’s why such a specific ratio was prescribed for the project:- 1:2.

Though I’ve studied the formula and read Matila Ghyka’s treatise on it, I have never subscribed to the idea. This was consolidated in conversation with an Oxford mathematician who dismissed it all as codswallop or ‘Godswallop’ for the atheists. The cult of Pythagoras must be approached with skepticism. Apart from their mathematical logic, ancient Greeks were also superstitious. Mustn’t sleep under a roof where swallows nest for example (in case they shit on your head next day), mustn’t stir fire ashes in the mornings etc etc.

For practicalities sake, costs had to be kept low so I used good quality emulsion for the bulk of the picture’s surface area, as I did when painting scenery for the Witches of Eastwick. I used acrylics for detail – which meant the work would be dry enough to handle upon completion. One of the good things to come out of the process was: it increased my scant awareness of opera. Though I seem scathing of it in my appreciation of the Fall, in truth I listen to opera more than I let on.

If we adopt Itten’s theory of contrast in painting to write well, it can be used to highlight the point you are making. If you want to celebrate the creative genius of Mark E. Smith, set it against a backdrop of high-brow stuffiness. The Gothic determination in Smith’s contribution to the Arts can be better exemplified. By the end of this project I found I prefer Borodin and Donizetti to much of the Bel Canto.

The penultimate stage was affected by snow. I had to use some wood to scrape it from the skylights; the studio was a cold place to be. Producers at Thames TV wanted to see a photo of the work; I was reluctant to make changes – they weren’t paying enough. So I called a friend who has worked in TV most of his life. He put into words my exact thoughts about it all – ‘I bet they won’t get that past compliance’ said Gary. With his usual, acerbic candour he was right – as was my initial hunch. Never mind. I performed well and did the job. Thames TV should have consulted me more thoroughly in the first place and paid better. I will respect Fremantle Media’s wishes and not show the final product here. It was a fun piece of TV tat, surreal and visually alive but slightly naff – which is probably what the producers wanted.